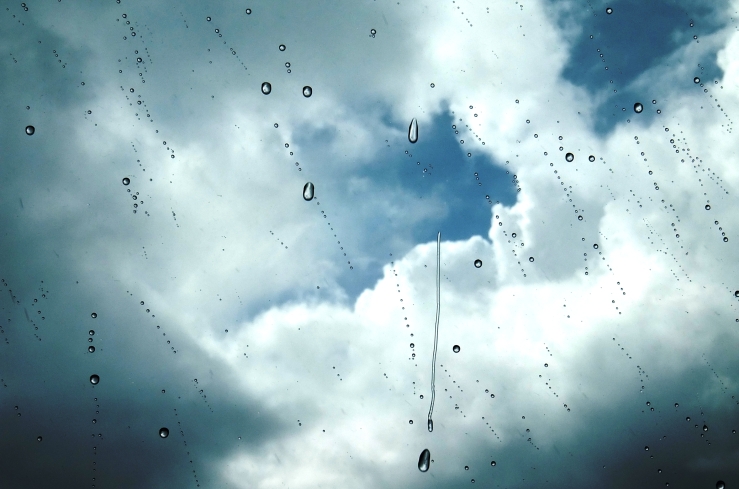 He stands in grass alongside the highway, ignorant of the whip of wind thrown by the passage of car after car, the hum and roar of a thousand faceless strangers coming and going, entombed in ceaseless steal.

His pants are pulled high the way old timers wear them.  His shirt is wrinkled but tucked in.  He stares up at a sky of uncut blue, devoid of texture or limit.

A man rises from a bench at his back.  A bus stop linked to the highway by a turnoff.  The man’s approach is slow, careful.  The man is old, he walks with a cane.  The old man stops at the highway’s edge and he too looks up at the limitless blue.  The old man speaks.

The weather maker takes a gold watch from a pocket.  He looks at the time and he looks back at the sky.  He does not look at the old man and he does not respond.

He walks west until two city blocks have trod underfoot.  An off white block of a building stands set back from the street.  Oversized letters bolted to building face denote the company owning a variety of businesses housed on each floor.  Along a sidewalk running past the building’s front a few dozen fresh faces hold signs bearing slogans maligning the weather forecast, cursing the local weatherman for the state of the world.

Whoever said ‘Rain, Rain, Go Away’ needs to take that back!

Mock dissidence, sarcastic picketing.  The weather maker stands apart from the marching flock and he watches, he listens as they shout their tongue-in-cheek chants to the world, to passersby, to all.  Old protest standards repurposed with a new punchline.  Cars honk, people stop to watch.  Each in time moves on and among them the weather maker does the same.

The front door is glass set between columns, the building face’s only yielding to ostentation.  Fingerprints above and below a sign reading PUSH mark the touch of a thousand prior trespassers.  The room into which the weather maker steps is divided at its center by a semicircular counter staffed by two receptionists behind which the room trails off into two separate hallways giving visitors the illusion of choice.

The weather maker picks a receptionist using criteria known only to him and as he steps to the counter he locks eyes with this stranger offering to him a smile polite and genial.

She nods and she goes on smiling and on a console tucked onto the counter’s inner shelf she types something as she asks if he’s a relation, if he has an appointment.  The weather maker turns his face away but his eyes move back to find hers.  He tells her no, though to which question his response is addressed he does not say.  He tells her the man’s forecast is wrong.  He says it again.

“I want to let him know his forecast is wrong.”

She lets out a quick laugh but he remains placid.  She looks at the other receptionist and she looks back.  She asks his name and he gives it to her. She asks him to wait a moment please and he does so.  She types and she hums to herself.  Her eyes on a computer monitor.  She only looks up when a man with a large neck and a security badge appears from one of the hallways.  The sentinel takes the weather maker by the arm and he speaks with an authoritative air.

The weather maker stiffens and he twists away but the sentinel holds on.  It is here he begins to shout.  He says the forecast is ruining lives.  He says the man’s ignorance is poison.  He goes on ranting, spittle flying.  He says all the things voiced by the marchers outside but his sermon is earnest and brimming with fervor.  Lobby folk stop.  They freeze, they stare.  A woman puts a hand to her face.  Someone drops a phone.  The weather maker shouts still.  He blames them each one.  He blames their enabling.  He writhes in the grip of the sentinel and he goes on shouting, stopping only when a hand slaps him across the face.

They hold him in a conference room.  He sits unspeaking and when two uniformed policemen arrive he is unspeaking still.  The policemen exchange pleasantries with the security sentinel and they gather the facts of the weather maker’s outburst and with this done they return to idle talk.  The weather maker does not look up and he does not speak and soon he is being led from the building.

He sits uncuffed in the back of the patrol car.  His gaze faces front, watching the city’s unrelenting onrush. Halfway through the trip, in a gentle voice, almost a whisper, he begins to speak.  He talks of the wise, the soothsayers of old.  He talks of village elders, those keepers of knowledge known for their vision and foresight, revered.  He invokes the Farmer’s Almanac.  The policeman in the passenger seat nods now and then.  The driver looks at the weather maker in the mirror.  As they pull to a stop at their destination a single raindrop smacks against the windshield.

The weather maker sits on a bench beside a man in a suit chained to the seat’s scarred arm.  Years of etchings, meaningless leavings, memories.  The man in the suit stares at these.  The weather maker looks ahead at nothing.

People talk.  Officers, others.  They discuss him but do not speak to him.  They talk of his rant, sometimes interested, sometimes joking.  They talk of calling an evaluator, a doctor.  The talk moves on, the gossip shifts course.  He is not booked and no one is called and in time the weather maker is turned loose.

Traffic buzzes and barks with the start and stop of passing lives.  He stands back, face upturned as he waits for the bus.  A deep gray has bloomed above.  He goes on this way until the squeal and sigh marking the trundling bus’ arrival.

People watch the approach and recession of block after block or they hold bright devices in hand, scrolling and swiping and leaning close like lovers.  The weather maker looks ahead.  He listens to sounds beneath the surface, the quiet hum of the world.  Hands on knees, back stiff.  Jaw clenched at what he hears there.  When the bus comes to his stop he is already standing, he is already moving.

Darkened spots along the sidewalk fade where the touch of furtive droplets are being soaked into the hot pavement or eaten by the wind, the sun, the day.  The weather maker walks on until he comes to stand again among the faux protest and its chanting sarcastics.  He listens with hope.  In time he joins in.  They laugh, they chant louder still.  He talks, he shouts.  He recites the crimes of the forecaster and they dance along to the tune of his preaching.  Above and below the world begins to grow with darkness.  He tells them he’s faced the man before and he will again.  With their help he will again.  They march, they dance.  He stands in their center, roaring his fire into the blackening sky.  They march and stomp and they scream along with him, holding picket signs like clubs as the rain begins to fall.

Craig Rodgers has an extensive collection of literary rejections folded into the shape of cranes and spends most of his time writing in North Texas. His newest release is “The Ghost of Mile 43” is available on kindle/print.