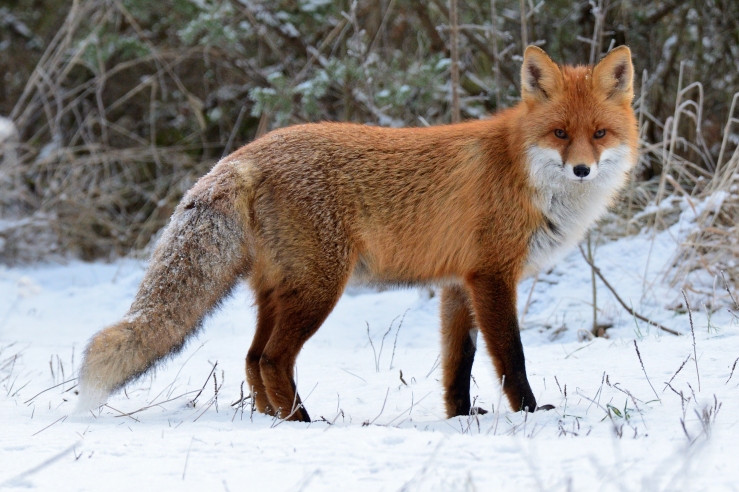 The red fox looked up to the sky and let out a loud yelp. Snow fell into his eyes and he didn’t see a shadow moving through the trees. A blast made him jump and a shower of pine needles fell on him when the bullet slashed through the trees. He darted into the thicker woods with his tail down as not to be an easy target.

When he stopped, he sniffed the wind and knew the human was getting closer, he took a chance and bolted uphill to the deeper snow. While he could walk across the top of the snow without sinking, the human would have to trudge through it at a slow pace. It would be an easy escape.

Behind a group of snow-covered pine trees, he listened to see if the human continued his

pursuit. Why would he? But he knew the answer. He saw his mate in the trap. The cruelty was beyond his understanding.

Crows in a tree farther down the slope cawed out a warning. The human was coming. The birds took flight and continued to sound the alarm. A large deer bolted past him. When he was younger, he might have tried to take one down, but now with missing teeth and sore legs the buck could kill him. He should have followed it.

The sound of crunching snow made him focus his one good eye in the distance and he saw the human climb up a pile of boulders. The fox watched as the human leveled a long stick to his eye, he looked through a tube on top of the gun. Before he realized that his red tail was sticking out into the pure white snow a spark came out of the gun and searing pain instantly spread from his leg to his head. He tumbled over and saw red flecks on the snow where he was previously standing.

“Yes.” The human yelled. The fox limped to cover behind some trees. He feared the next spark from the long stick, but suddenly the human cried out. The stick flew out of his hands and the human fell off the rocks and rolled down the hill until his body ended up hitting a tree. The human remained still, his long stick was nowhere to be seen and a trail of gloves and supplies littered the snow.

The fox licked his wound, but the pain didn’t stop. After the blast of the shot, the woods took on a haunting silence, until he heard crying.  He wanted to get closer to the human. The vision of his dead mate drove him. It took a long time while dragging his leg behind him, but he made it close enough to see the human’s bare fingers were shaking while frozen streaks of water lined his cheeks.

The human saw him and reached for something that wasn’t there. Panic filled his face. The fox waited.

“I’m sorry I shot you, but you killed my dog and all my chickens.”

The fox tilted his head.

The human sobbed. His hands started to turn a dark color. Night was coming and the human probably wouldn’t survive it.

“Maybe, I was wrong. The dog was my best friend and I was so mad. My neighbor said a fox did it and he said he knows it because he traps them. I would never trap any animal.”

His mate died in a trap. Should he help this man?

A yipping sound came from the pile of boulders. Two coyotes looked down upon them.

“I recognize that sound. That’s what killed my dog and chickens. It wasn’t you; it could have been the coyotes.”

The fox watched as the coyotes disappeared behind the rocks.

“I’m sorry. Revenge got the best of me.” The fox looked into the human’s eyes for a long time. Maybe he didn’t use the trap. He slowly moved closer while keeping a watch on the rocks. Coyotes were tricky and he needed to be alert. The man fell asleep and the fox stood guard as long as he could. Darkness was not to be denied and the fox curled up next to the man using his tail for warmth. He saw his mate waiting by a den. He was home.

The park ranger stopped the bobsled and looked down the hill. She took out her radio.

“This is Madison. We need medical right away. I’ll send you the GPS.”

She drove past a rifle and saw numerous coyote tracks, then followed a path of gloves and other items until she reached the man under a tree.

Next to the man was a fox. Its bushy tail covered the man as much as possible. The man’s

She felt his wrists and got a pulse.

“Make that a medical evacuation by helicopter. He may make it, but could lose his hands. This will be his last hunt.” She put the radio down and saw the man was trying to speak.

“The fox?” He managed to mumble.

Madison looked closer and then shook her head.  “It might have saved your life.”

She kneeled next to the man and covered him with an emergency blanket.

His hands shook and he opened his mouth, but he couldn’t speak. A single tear then fell down his frozen cheek and made it all the way to the ground.

William Falo writes fiction. His work has appeared or is forthcoming in Newfound, The Ginger Collect, Fictive Dream, X-R-A-Y Literary Magazine, and other literary journals.