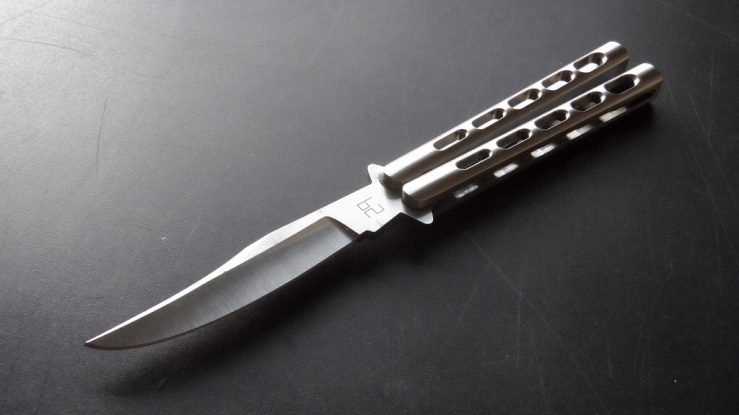 It was around 7 or 8 on a summer night. I was 15 years old. We were hanging out in my friend’s driveway smoking stolen cigarettes when somehow, I was in the middle of the driveway kicking Tommy’s head in over and over again. I don’t remember what it was over, he must’ve said something wrong to me. I get like this sometimes. When my blood starts pumping and I start seeing tunnel vision and I stop hearing what is being said to me.

I remember my friends Robert and Ben sitting on the cement steps watching. We were at Robert’s house and Robert’s house used to be a gas station in our town a long time ago.

Ben asked Robert if he was going to stop me and Robert said he would step in when it got out of hand.

Tommy pulled a knife out of his pocket. It was a butterfly knife, he flipped it open and stabbed me in the leg. Just below the knee, in the meaty part where the calf muscle starts. It didn’t hurt. It just made me wake up. Like when you wake up from a weird dream in the morning and you still think for a second that it was real. I just felt it. I held my leg out and turned it, the knife sticking out my leg, blood running down my leg into my sock. It was a nice knife. It was burned steel so the sun reflected off it and into my eyes and I saw spots. Tommy didn’t have enough time to lock the handles in so the handles swayed and glinted like wings as I turned my leg and I could feel the blade shift in my leg.

Tommy scooted away from me sliding on his ass, his palms scrapping on the ground. His face was a red swollen mess with blood stains down his shirt.

He got up and ran away crying wiping his face.

Robert and Ben walked up to me.

It put my foot on the ground and put some weight on it and it felt fine. I bent over and locked the handles together and grabbed the knife by the handle and pulled. I think it was stuck in my bone some because it came out kinda hard. I had to twist the knife some and it cut into my leg more. I yanked the knife and it came out all bloody, more blood ran down my leg. The knife had white stuff on it and white stuff was leaking down my leg mixed in with the blood.

“What’s the white stuff?” I asked holding the knife looking at it.

“Fuck, can I keep the knife?” said Robert.

“But you already got that black knife.”

“Yeah, but I got stabbed with this knife. I get it. You ever get stabbed you get the knife.”

“Make sure that shit don’t get infected,” said Ben.

Robert had an idea. He went inside his house. His mom was mostly deaf and there was some other stuff wrong with her and she never knew what was going on.

Ben and I were sitting on the steps, the blood drying down my leg. Robert came back out the house with a half drank pint of 5 O’clock vodka and a dish rag. Robert was my best good friend and he was making sure I was going to be okay.

He gave me the vodka and I put my leg out and I pinched the wound with my fingers and pulled it apart. It was deep red black and sticky inside. I poured the vodka down the hole and the vodka sizzled in my leg. I felt the sizzling travel to the center of my leg and down the inside of my calf. I grinded my teeth and grunted. Pink vodka blood spilled out the wound and splattered on the cement steps beneath me.

We looked at him. He was pale and sweaty.

Me and Robert nodded at him.

He left, slowly walking across the lawn looking up at the sky. He didn’t hang out with us anymore.

I poured more vodka into my leg and wrapped it with the dish rag. Robert went back inside and came out with a pair of his jeans for me to wear home so my mom didn’t see. I put the jeans on and left my shorts in his garage.

My leg was starting to ache by the time I got home.

A day or so later I was waking up to spots of blood and yellow puss on my white bedsheets. The wound was all red and puffy.

I didn’t know what to do so I told my mom and we went to the new med express in town.

When we got there the nurse asked me tons of questions in the room. I was sitting on the table with the crumply white sheet spread over it. I wasn’t smart enough to make up a story so I just kept saying I didn’t know what happened and shook my head. The nurse glared at me and my mom and said she wasn’t going to beat a dead horse.

Another nurse came in the room and they had a syringe full of peroxide and they stuck it up the wound and it hurt like fuck and they shot peroxide up into my leg and it sizzled way more than the five O’clock vodka did. They did this several times until the wound was cleaned out. They cleaned it with disinfectant wipes and cotton swabs while shaking their heads at me and telling me how stupid I was. They said it had healed too much to put on regular stiches so they put on these butterfly stiches that held the wound together. The doctor came in to write out a prescription for antibiotics. He told my mom to take better care of me. My mom’s face was red and she looked down at her purse in her lap.

They printed out the bill at the front desk and my mom started tearing up and wiping her eyes when she saw it.

We left for the pharmacy.

In the car, going through town, we got McDonalds and my mom begged me to tell her what happened. But I wouldn’t say anything. I just folded my arms looked out the window. The kid I beat up never said anything either. You just can’t do things like that.

A couple days later, when my leg was feeling better and my mom was at work I went over to Roberts house. I limped down the street. It was hot out and I was sweating under my bandage that I had to change every morning.

I knocked on Roberts door and he answered, “Shit, what’s up, man? How’s the leg?”

“Yeah, it got infected.”

Robert came outside and we sat on his steps and we lit cigarettes. I pulled the butterfly knife out of my cargo shorts pocket flipped it open and snapped it closed again and handed it to Robert.

“Here, you can have the knife.”

Robert looked at me side-eyed while he grabbed the knife.

I shrugged. “You wanted to help me. So, thanks.”

Robert said he would always want to help me.

He took the knife and started to flip it open and close until it was a spinning blur. Robert was superfast. More than I could ever be. And our cigarettes just sat smoking in our lips as we watched the knife fly.