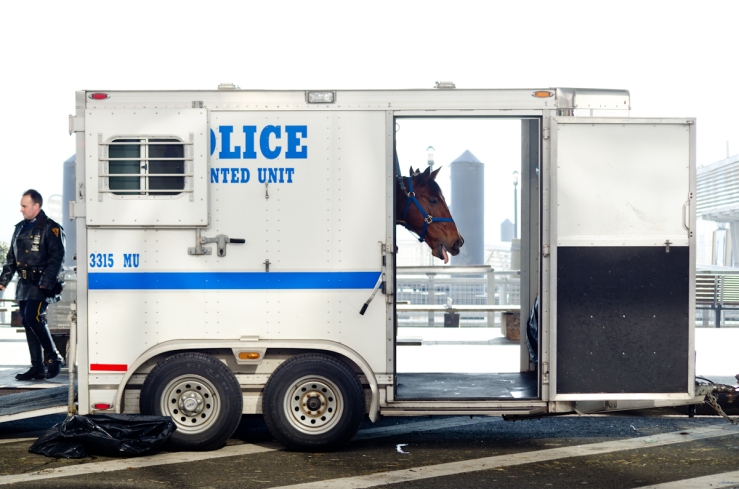 When Alfred was boy, his father was a mounted policeman for the NYPD, stationed at a precinct near their home in Staten Island. He was a tall man, statuesque on his horse as he made his rounds in the neighborhood, presenting to onlookers the epitome of strength and authority.

His father joined the police when the borough was still known as Richmond County, separate and distinct from the city across the inner harbor. Richmond then consisted of villages hugging the north shore, and to the south, farming communities and beaches at the southern tip

Alfred’s father was part of the mounted police force known as the Staten Island Dragoons. At parades, they wore high helmets with tassels flying in the breeze as the unit rode down the cobblestone streets every holiday.

When the four counties surrounding Manhattan voted to merge, his father became a member of the NYPD. Although he still trod on the cobblestones on his beat, it was no longer as a small-town county police officer. He now represented the largest and greatest city in the world.

Every morning, he put on his tailored white gloves to fit his large hands, and button the tunic of a tall man’s uniform with ease, but tuberculosis, fueled by alcoholism, came to gradually lay him low.

When the boy was 12, Alfred’s father died, leaving him responsible for his mother and younger sister.

That September the boy did not start seventh grade. Instead, Alfred made his way daily by trolley and train to the south shore where he worked sweeping floors in a nickelodeon run by a quiet Hungarian named William Fox.

When he was sixteen, the boy managed an entire row of Fox’s nickelodeons on South Beach. On weekends, he went to Fort Lee to haul equipment and props for Fox’s newly formed film production company

Sensing his intelligence, spirit and dedication to hard work Fox offered to take Alfred to California. Opportunities abounded out west, he told him. You can make a fortune with me, he added.

“This is a great opportunity,” Mr. Fox told the boy, now a teenager on the cusp of adulthood.

The response was easy, and given expectedly. “I have to care for my mother, sir. I must stay here.”

Years later Mr. Fox was seriously injured in an automobile accident, and while in recovery he lost his fortune in the stock market crash. Misfortune reached its nadir when Fox lost his film empire in a hostile takeover led by his creditors. He died in obscurity in Brooklyn, no longer associated with the company that bears his name.

The young man worked around Staten Island, toiling in the gypsum factory on the north shore near his home in Port Richard. When drafted during World War I, Alfred joined the state militia, and later was attached to the U.S Army’s Aviation Section, Signal Corps, the unit that later evolved to the modern air force.

He was a corporal and a cook, serving in Oklahoma and Texas.

After the war, Alfred returned home. He fell in love with a tall Irish girl working as a clerk at the Edison record store in nearby New Brighton. They married, raised a family, and three heart attacks and a major coronary later, Alfred waited for his wife and sister-in-law in the back seat of a car in the parking lot of a Bon Marche in Asheville, North Carolina.

He was 77, and grateful he made it this long.

Alfred was with his grandson—his youngest—who was 11 and had already shown the drive and intelligence he had shown in his youth.

As he sat with his grandson he recalled declining Mr. Fox’s offer, and felt no regret. He remembered his father’s alcoholism, but did not tell the kid that. It was too horrible. One night, his father got so drunk he tried to ride his horse into their home.

Mother made him promise to never drink. His solitary vice was cigars, petit coronas.

He told his grandson of the summer of 1918 watching rattletrap biplanes straining for height in the Texas sky. He talked about his best friend, who was killed in a training flight crash.

Alfred told the story of meeting his wife at the record shop. He had the snapshot he took of her, now crinkled and faded secreted away in his wallet. With gnarled fingers, weakened by work and diabetes, Alfred showed him.

As they sat in the back seat under the late November sun, he fell silent. He remembered that though his father was a mounted policeman, he never taught him to ride. Alfred couldn’t recall that his father even put him on a mount.

Alfred thought to when he watched his buddies ride horseback in Oklahoma and Texas. When offered he always nodded no. They kidded him about it, but good-naturedly.

Impulsively, he opened the passenger door.

He nudged the boy, who moved lazily out of the car.

They walked until they arrived at the row of kiddie rides by the entrance of the Bon Marche. Stopping at a weathered mechanical horse, the old man fished a dime out of his pocket.

“You’re too old for this,” he told his grandson, placing the coin in his hand. “But I’m not.”

He climbed up. It was too small for his frame, and due to his age hard to keep balance. Still, Alfred was determined. He motioned for his grandson to put the coin into the slot.

Hoofs clacked loudly on the cobblestones of Ann Street as the young police officer rode toward Richmond Avenue. In a measured trot, he expertly turned right at the broad avenue.

Resplendent in his police uniform and tasseled helmet, he cut an attractive figure to the ladies watching from the passing trolley.

With his white-gloved hand, he saluted, smiling at the tall brunette staring at him from her perch in the rear of the trolley before continuing on his rounds.

—
Mike Lee is an editor, photographer and reporter for a trade union magazine in New York City. His fiction is published in Soft Cartel, Bending Genres, Ghost Parachute, Reservoir, The Opiate and others. Website: www.mleephotoart.com. He also blogs for the photography website Focus on the Story. https://focusonthestory.org/stories/