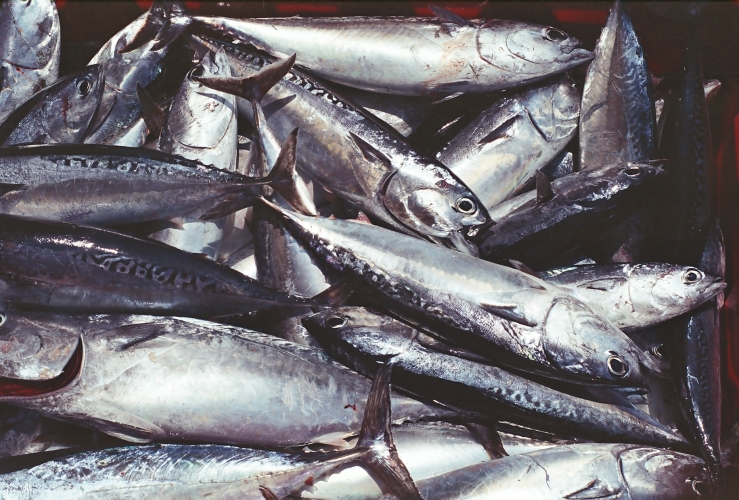 Complete it! Go on. It’s 100% true, and definitely one of my favorite sayings!

I don’t know what the big deal is, though. Giving men fish. What’s the harm, if you have the fish, and he does not? Generosity is a virtue. Teaching? Teaching takes time, effort. It could take years. Taking a fish out of your front jacket pocket and slapping it into a man’s hand, however, happens in an instant. You can keep giving him fish and giving him fish, for weeks and weeks and weeks. For ever.

It’s no problem, you say, even as you see his enthusiasm for fish and the light in his eyes dim with each passing day. His family can’t remember the last time they didn’t have fish for dinner, he says, and they tire. But you do not tire. You never tire. His polite attempts at refusal turn into outright attempts at avoidance. But you find him anyways.

You always find him.

One day he sees you on the street and he runs the other way, but you run faster still. He trips, and on his knees he begs for mercy that will never come. You stuff a flounder down the front of his shirt. He limps away, sobbing. No matter. He’ll appreciate the next one more.

You open your mailbox and find a restraining order. A couple of hours later you are on the grassy slopes behind his house, exactly three hundred yards and one inch away from his back porch. You aim a jury-rigged t-shirt gun into the sky and fire, again and again and again. Fish arc through the sky.

Tilapia shatter his windows. A light breeze carries the screams of his children.

Fish delivered to his workplace. Fish ordered to his table at restaurants. Fish in his bathtub. Fish in his son’s cradle. Fish in the trunk of his car. Tiny guppies come pouring out of his cereal box instead of Wheaties. He looks in the mirror and he’s greeted by the dead-eyed stare of a mackerel tuna.

The months of fish stretch into years, and you never miss a day.

It’s too much. It’s tearing his family apart. His wife takes the children out of state while he’s at work, and when he comes home that day he finds a rainbow trout on his living room table, twitching on top of the divorce papers.

Forty or fifty years into the future, on the very second of his death, you slash your wrists open and bleed out on your kitchen floor.

In the formless void between worlds you flare your nostrils and catch the scent of his soul, which is ascending to Heaven. He’s almost there. He’s so close, but now you have him by the ankle, and he kicks helplessly as you drag him away from the light. You haul him into the black depths of the ocean, and you haul him deeper still, down into the earth. The darkness and the cold and the pressure, a million million tons of dark and cold and pressure– it all would have broken him, if he were not already broken.

And in that suffocating madness something is pressed into his hand.

Give a man a fish, and he’ll scream. He’ll scream forever.

Ferdison Cayetano is a current student at the College of William & Mary. You can connect with him on LinkedIn and give him a real job before he commits to being a writer