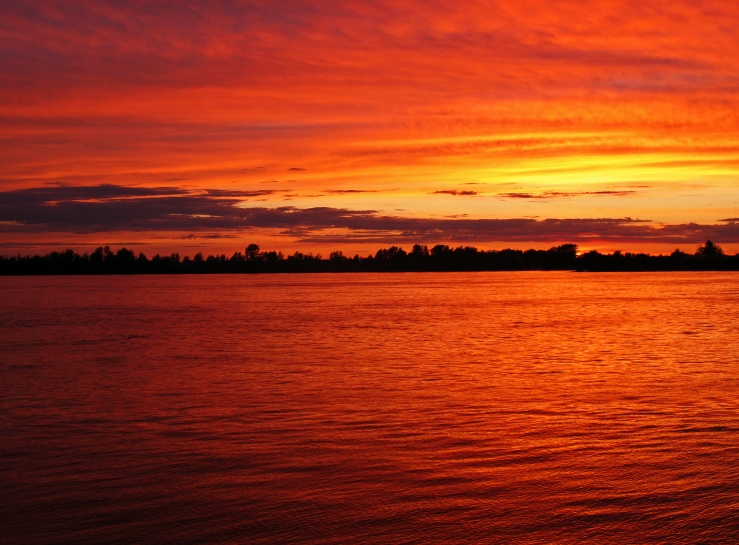 He landed on the bank of a golden river. The turf there was golden under a weeping cherry tree. It was in bloom. The small person — a girl — had round eyeglasses and he wondered if she could see how the afternoon light and the reflection of the blossoms turned the river surface the color of claret. The girl was not looking there, she was taking her violin out of its case. It was badly out of tune. She tuned it skillfully, swiftly, and began to play a melody so hauntingly sweet he forgot himself and wept on his control panel which shorted out. He did not notice this at first, so mesmerized was he by the girl, her music, her large round eyeglasses which reflected the claret color of the water and its golden ripples.

Then it was time for him to leave, to return to his own era. Soon, he would need food; his body was not used to such long periods without nourishment. But the control panel was ruined and he had no way to repair it. He was trapped. This alternate timeline that seemed so charming was doomed to end, he knew, in the imminent explosion of the planet. Alas. Yet — he might just know a way to avert that catastrophe, if he acted fast. There was no time to waste, but first he needed to eat. He approached the girl and, before she could react, removed her eyeglasses. After all, he was an obligate carnivore.
They would have been
a bit too crunchy.

Kyla Houbolt’s first micro chap, Dawn’s Fool, is available from IceFloe Press. She is a Pushcart and Best of the Net nominee. She has a bad habit of sticking poems up on trees and leaving them for any who walk by to read. Most of her published work is here: https://linktr.ee/luaz_poet.