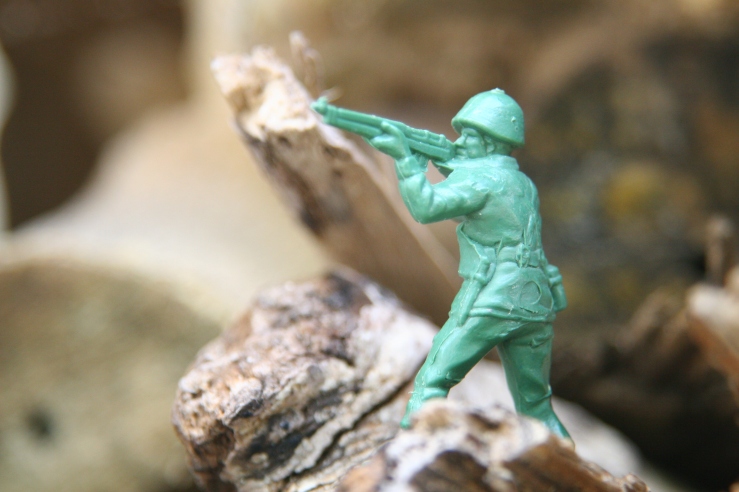 Today I am a grown man staring at a plastic military-shocktrooper-gunship playset. Looks pretty rad. Action figures sport big muscles and oversized rifles. Bright orange missiles snap onto the side of the chopper. I recognize it as just the thing mom and dad would have given me for Christmas when I was a kid. My folks were something else. They laughed at those other parents, the ones too precious to let their honor-roll darlings play with toy guns. Mom and dad loaded me up with G.I. Joe tanks and up-armored hovercrafts, life-sized plastic M-16s, WWII-style combat helmets. I’d spin circles around the driveway in a camo-patterned Big Wheel tricycle decked out with gun barrels, scanning the backyard for creeping Russian soldiers, sweeping the sky for bogeys.

Today I am eight years old. I stuff a G.I. Joe into some random plastic car. When it comes to toys, I mix and match. He-Man rides into battle atop Optimus Prime. Barbie goes on dates with all four Ninja Turtles. I pretend the car runs over a bomb. Boom! I flip the car into the air, watching it spin circles before slamming against my bedroom floor. I fish the brave soldier out of the vehicle. Disaster. The rubber band connecting its legs to the torso has snapped. My G.I. Joe is an amputee, split cleanly in half.

I rush to my father. Wake him from a Sunday afternoon nap. Dad can fix anything. He’s that type. Square jaw. Reliable. He fought in Vietnam. Infantry. Volunteered for it. I don’t think he saw much action, but he received the Purple Heart twice for wounds suffered when landmines detonated nearby. For the rest of his life, a pattern of dark blotches remained visible on his arms—a grim pointillist masterpiece, black marks from the heat and debris of explosions. If you’d glance at his arms and didn’t know, you’d just think it was a million freckles. Faded black globs, seeming to flow, combining into some kind of super freckle. Only they aren’t freckles. They are the fingerprints of landmines.

Dad examines my bifurcated toy. Fiddles with it, tries to loop the split ends of the rubber band around a small metal hook in the torso. He asks what happened. I tell him about my game, the imaginary bomb. Dad shakes his head like he understands. Tells me it’s fine. His voice sounds strange, like he’s speaking from far away. He tells me he saw the same thing in Vietnam. Some guy he’d known. A bomb. Explosion. Dad was right there beside it. When the smoke and noise cleared, the guy lay on the ground in two halves.

Dad fingers both pieces of my toy like an old woman with a Rosary. Frowns. Hands them back to me like he doesn’t want to touch them anymore. Tells me he can’t fix this one. Sometimes people break, he says. Sometimes you can’t put them back together.

Today I am a grown man writing a story about my father.

Alex Miller is a writer and graphic designer who lives in Denver. His fiction has appeared in Pidgeonholes, Maudlin House and Rabbit Catastrophe Review. He is the author of the short story collection, “How to Write an Emotionally Resonant Werewolf Novel.”