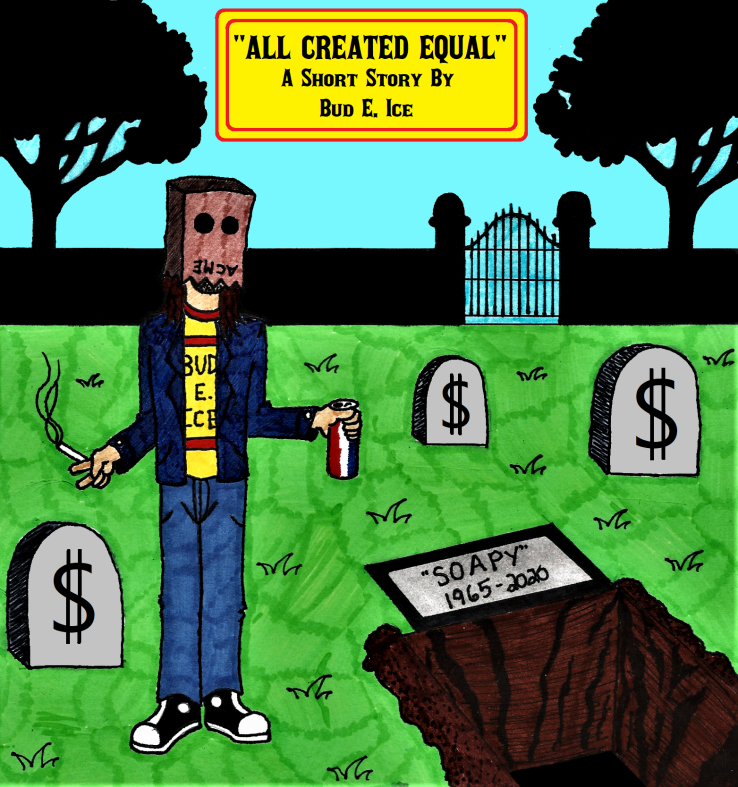 I stood there looking at this hole in the ground. Six feet deep with walls made of dirt. That’s where Soapy was going. Everyone at the job called him “Soapy” because we came to the conclusion that he never took a shower. We found humor in the irony even though it wasn’t that clever.

I decided to attend the funeral because I was off from work that day and Soapy had never given me a particular reason to dislike him. I was one of three people there, with the exception of the priest and those working for the cemetery.

Soapy’s gravestone was so small that it could have easily been stepped on had there not been a big ass hole dug up in front of it. The priest said some prayers and I blessed myself once I saw everyone else do it. Then it was over. The whole thing took about ten minutes. The groundskeepers stood off to the side, waiting, so they could lower the body in and cover it up with the excess dirt.

I walked up to the gravestone as everyone began walking back to their cars. One last look to take it all in and see what the inevitable future was headed for. Apparently Soapy’s real name was Bernard. He was also a lot younger than I thought he was. Aside from the bad hygiene, I didn’t know much else about him. But I still ended up paying my respects somehow. There were probably people out there who had known him much better than I, but they were nowhere to be found.

“You almost done here?” I heard a voice say from behind me. It was one of the gravediggers, an elderly man who looked five seconds away from burying himself.

“Sorry for your loss.”

I didn’t know what else to say. It wasn’t really my loss. But there was no point in explaining any of that to him. He was on the clock and had a corpse to bury.

“How do you guys get the hole so perfectly squared?” I asked.

“We get a lot of practice,” the old man replied. I almost forgot that people die everyday. And that other people get paid to bury them.

I looked around and scanned the cemetery. I saw a group of men constructing a rather large monument a few yards away.

“What are they doing over there?” I asked.

“That? It’s called a mausoleum.”

“It’s a lot  bigger than my friend’s little plaque, here.”

“That person probably had a lot more money than your friend.”

“Even in death you can tell who the winners were.”

We may have all been created equal. It’s just a shame we don’t always get to live or die that way.

Bud E. Ice is a functioning alcoholic and part-time lowlife located right outside the ratchet grounds of Southwest Philadelphia. His work typically involves a comedic take on social etiquette, race, class, morality, battles within the self, family issues, death, vulnerability, and whatever other realities seem relevant at the time of the writing. It’s HIS reality, but a reality nonetheless. So the reader can either RELATE to it or LEARN from it. After all, isn’t that what this is all about? There’s far worse ways to waste time. Follow him on TWITTER: @BudEIce