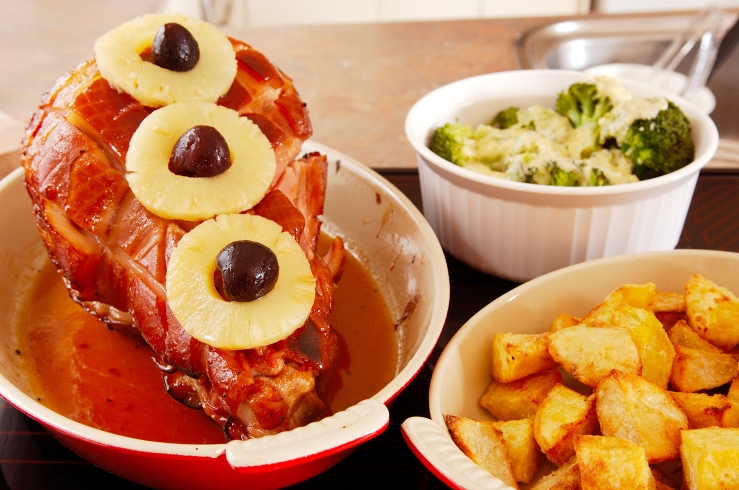 When she was twelve, April’s father was transporting the Easter ham from the outdoor grill to the kitchen and dropped it onto the breezeway’s concrete floor. April’s mother, of course, was furious. Moments later, both parents screamed at each other over the ruined meat. Pineapple glaze, April’s favorite, oozed into the pores of that rough floor, built so many years ago by the original owner of their ancient farmhouse.

From that day forward, nothing was the same. Her parents’ holiday arguments grew more common as the years passed, making fancy meals an endangered species in April’s home. Thanksgiving turkey drumsticks were wielded as weapons. The Christmas roast was lobbed like a grenade and left on the floor as luxurious dog food. Jellied cranberry sauce dripped from walls like Technicolor blood at the multiplex.

Now, so many years later, April has a family of her own. But she’s more careful. Her family battles are fought over ordinary plates of fish sticks or peanut butter sandwiches or mac and cheese. Her children will grow up with happy holidays.

Jessica eased the car to a stop at the traffic light. She and Wayne had never been in this part of town before. The GPS told them that they were just a few minutes away from the new restaurant where they were meeting friends for dinner.

“What the hell?” Wayne said suddenly.

“What is it?” Jessica asked, following his gaze out the passenger window.

“Who would give something that name?” Wayne asked.

“Where?” Jessica said as she focused on a large sign between two bushes. “Oh!”

“Must be some kind of joke,” Jessica replied.

From the car behind them, someone tapped the horn, a polite reminder that the light had changed to green. Jessica and Wayne both kept their eyes on the sign while she inched the car forward. As their perspective changed, they saw the letters move out from behind the bush on the left.

“Ahhh!” they both said as Jessica fed the car more gas, and they sped on toward the restaurant.

“I think the waterfront is over that way,” Jessica said.

“I guess there’s a canal around here somewhere,” Wayne replied.

“Yeah,” Jessica said. “And we’ll have a good story to tell at dinner.”

He could feel Debbie looking at him from the passenger seat. They’d been dating for three months, and things seemed to be getting serious. There were no enormous “red flags”–just a few small ones, barely pale pink, nothing that they couldn’t deal with.

“No,” Marty said, chuckling. “Nothing dirty.”

“What is it?” Debbie asked.

Marty inhaled and was about to answer, about to tell her that a simple hand on his shoulder was all he ever needed to feel better, when Debbie interrupted: “Wait! Don’t tell me. It’s too much pressure! I don’t want you to be disappointed if I don’t do it.”

But for that moment, as Marty steered the car toward the freeway exit and Debbie changed the subject to whatever their plans might have been for that evening, the only question he could answer for certain was how he knew he was with the wrong person.

John Sheirer lives in Northampton, Massachusetts, with his wonderful wife Betsy and happy dog Libby. He has taught writing and communications for 26 years at Asnuntuck Community College in Enfield, Connecticut, where he also serves as editor and faculty advisor for Freshwater Literary Journal (submissions welcome). He writes a monthly column on current events for his hometown newspaper, the Daily Hampshire Gazette, and his books include memoir, fiction, poetry, essays, political satire, and photography. Find him at JohnSheirer.com.