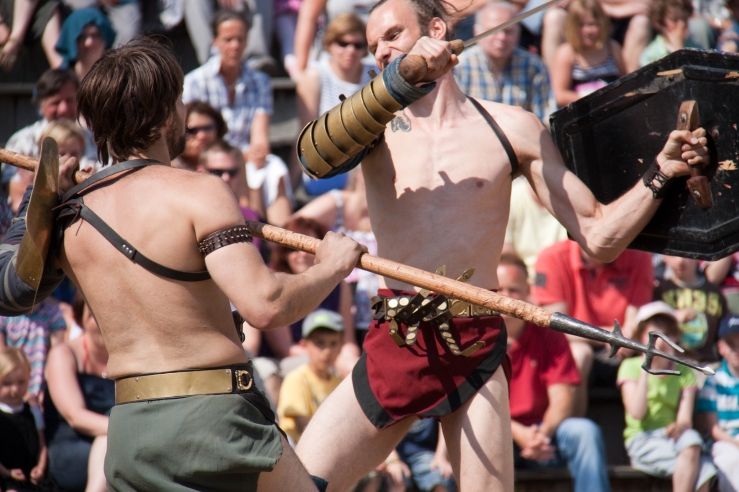 There are feeble-looking man-ferrets running in circles, many endless ovals. They are thin, emaciated and reeling; clearly unkempt. Onlookers get the sense they’ve been at this for an excruciatingly long period of time, marveling at this spectacle without definition. They are equally perplexed when a man who drops his arm next to a chalked line trampled many times over suddenly means victory.

There are huskier fellows throwing weighty parts of a forgotten pulley system around the infield, in concert with more nimble ones who invert themselves on poles and become primitive catapults reminiscent of when humans were artillery in those ancient, epoch wars. Opportunities for carnage escalate with each jump, with every throw.

Then there is the man with the javelin whose activity will someday struggle to translate well to modern playgrounds. Unrefined, he calls it what it is – a spear. He looks the part: suspicious and bloodthirsty. A thrust of his weapon guarantees a win of different sorts, but he knows better. He is the penultimate gladiator, the lure and the bait, tempting a growing field of spectators whose collective interests mount with the potential of soon-to-be impaled running man-ferrets.

Make no mistake: this is what puts butts in the seats, what really gets a crowd roaring.

Thad DeVassie is the author of the forthcoming collection THIS SIDE OF UTOPIA (Cervena Barva Press). His work has appeared in numerous publications including Poetry East, New York Quarterly, North American Review, West Branch, NANO Fiction, and PANK. A lifelong Ohioan, he is the founder of a brand messaging + storytelling studio in Columbus, and the co-founder of JOY VENTURE, a podcast and platform for sharing stories of unlikely and risk-taking entrepreneurs.