Solder
R u still at the chicken factory? Ive just finished conducting the autopsy so im gonna send a bunch of info. Call me when u can
Solder
The arsenic content found in the chicken itself was negligible and the contents of the stomach had barely begun to digest at the time of death. It was a botch job, they just sprinkled it in with the breadcrumb mix. Like this is barely even attempted murder – would’ve just given him some stomach ache
Solder
I also tested the chicken, fries, and gravy for any other kind of bacteria/contamination but found nothing
Solder
There are no contusions on the skin, suggesting he was alone in his car and there was no struggle or awareness
Solder
Cause of death seems 2 b asphyxiation. The trachea and lungs are bruised and blackened indicating smoke inhalation. Otherwise critical burns across the limbs, torso and neck but all below the surface? The burns seem to have affected the interior tissue and muscle, specifically the areas around the joints, but not the skin. If I didn’t know the circumstances I would say he died in a fire
Solder
But get this as well, his lungs were punctured from the inside. Black from smoke but one large gushing hole torn open, still red. The tear is smooth and precise. Almost as if something inside burned its way out. It’s v hard to explain i dont know if ive ever seen anything like it. Sorry being a bit unprofessional here im just a little freaked out
Solder
Im thinking it must have been something he ate?
Ramuli
Hmmmmm
Ramuli
im still here yeah
Ramuli
But youre not gonna like my theory
He returns his phone to his pocket and flicks a feather from his arm.
The factory floor is sprawling and brown and rattles like a steel cage where he stands alone, dressed sharp in that old coat, 6’ 3” and all, his commanding presence with gun bulge pointing the way like a dowsing rod, huffing, fingers on his chin. The workers all scurried when he asked for time to think. There flickles right now that tang on the tongue: his salivating sour guilt. But he enjoys the power and smiles. Huffs. On his hip the warmth of steel coffee raises heat.
Although devoid of life, the floor heaves like a lung wall or a wheat field when the ancient ventilation conjures up and rustles the years of defecation and cannibalism past, pecked raw feathers, rose-tinted glasses. The residue has been trampled flat by the thousands of claws over the years and the years, the poor swarms of concentration, but that doesn’t seem to have stopped the smell.
Strips of steel rods suspend intermittent feeding stations – wire domes that hold the grain and hormones like his office lamp holding fragile the light across his framed degree and crumpled conspiracies. This is free range and they get away with it. 100% British meat. Huffs up some gristle. He got KFC on the way. Irony never lost on him. They charge him when he’s not in uniform. It didn’t taste like he remembered. A blood vessel got lodged snapped electric between a canine and incisor plus mayo down his shirt.
He visualises the space to reconstruct the ordinary, eyes closed, detective instincts tuned: darker than he expected: bodies so close they merge as one, an organism… screaming, swelling, pecking, clucking… individual motion a mystery. Assuming of course these birds have capacity for such thought? Does it matter? The muscles swelling and screaming from hormones and pecking. He doesn’t eat beef but once tried a bite of a girlfriend’s steak.
He crunch paces across the shit stained feathers.
Ramuli
the chickens have vanished
Solder
what?
Ramuli
across the whole factory, Solder
Ramuli
est time of death?
Solder
Just after midnight
Ramuli
I asked to view the CCTV footage
Ramuli
at 23:30 the chickens are there
Ramuli
at 00:30 they’ve gone
Solder
???
Ramuli
and between 23:30 and 00:30 the footage is corrupted. It’s just a white screen
Crunching steps bring legs to the corner where the breezeblocks begin to slope. The camera is mounted 11 oclock facing his feathered absence expanse. In the fisheyed dark he notices other hangers on, threatening to fall. Bringing hands automatic he dusts his coat again and it snows, slowly; fast forward.
Darker stains on the floor sign the presence of blood. As always, his suspicions are confirmed. He’s a genius of course. These chickens were not debeaked. And that would be written on a poster with pride. Spits disgusted.
Without the brooding of a hen chickens do not learn what not to peck:
breasts become boneless bites
wings under heat
gristle molten gravy
bit dippedive fries to
sweetness soaked clothes
and celluloid ovals
rosypinned through the nose.
He doesn’t have to tiptoe to find the roots, where the wires enter the wall like parasitic spinal worms, partway melted where it must get hot. Acrylic camera casing seems spotless… but he finds evidence of tampering with the connection: beneath the socket a distinct mark, about two inches in length, three scars scratched deep. An accidental trace? Curiously animal in intent. Could a chicken have really carved concrete so sharply?
Where he then takes a rubbing
and somewhere sonorous
a rooster sounds. 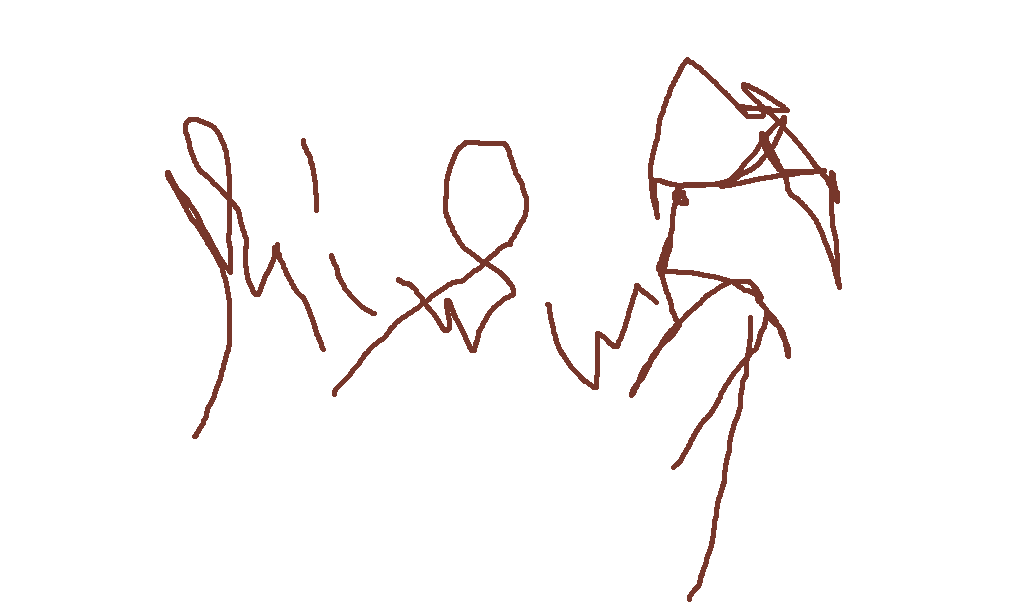 Ramuli
I’m going to be here a little longer
Ramuli
looking for a certain witness…
She removes the latex gloves once she’s closed the car door. Her father insisted it when she flew the family Focus through medical school, when post-dissection blood prints pinched at the handles or wheel, and it has since become ritual. A man obsessed with cleanliness. He threw a highchair across the room when her mother once spilt gravy.
In the rear view she reapplies lipstick and halfway wedges her paperwork into the passenger seat.
PRES HER
Truth manifests in void.
Yesterday wasn’t a whole lot clearer, either. Where did sense go? Never in her career had she seen household bleach behave in such a way. To corrode the organs to a coagulated curd? And the smell! The smell! In what could have only been a few hours? Chemically impossible… let alone the husband whose cause of death remains a mystery.
The 9-5 corpses’ mutilated material seem more alien than ever – fumbling with her keys – one day smeared into the next dismembered sliced fat layer peeled back across the weekend.
More bodies wheeled in throughout the rest of the week too:
frozen
shot
hung
dissolved
spent
dessicated
deep fried
chewed
And however many days ago she had to scream down the phone at her superior when some deranged picnic basket pork chop cannibal came knocking at the windows of the morgue with ketchup round his mouth. The pharmacy shut down. Her husband’s medication slipped into her handbag from the stockroom. Everything sweating. A tower beginning to bow. Plus the paperwork incomplete and near nonsensical not to mention her psychological / physical suitability checks just around the corner…
She clutches the silver crucifix through her lab coat
and her draining image of self rumbles as a truck rolls by: pig snouts snuffling from between the slats, and straw in the wind spread West down the road.
Solder
Catch up with me tomorrow my head is all sorts of messed up
Solder
I really don’t know if I can keep doing this Ramuli
Solder
This is beyond me now
Solder
I’ve been losing hair at an increasing rate
Solder
It’s not just a streak anymore I’m grey
Ramuli
Hey come on I need you you can’t quit
Ramuli
What would I do without you?
Ramuli
And I think I’m onto something anyway
But what though? What this time? As always? This is what he always says before dragging her, shedding, into some glistening/puffy room of weirdos. Pray to God it won’t be aliens this time.
She pushes down the handbrake and lets the car roll back into the grassy knoll where it softens still. The car park like an unfilled form dissects the tarmac into boxes. No insects anywhere. The titanic pylons across the fields buzz and crackle. The land drops away. She can’t stand those piercing LED headlights, violent blue. Like the one facing her from a few boxes away, engine idling with a menace she imagines she can hear through the windows. The car practically trembling with predatory adrenaline. Metal veins pumping gas and fumes. No flies on the windscreen…
revving…
revving…
She feels obliged to reorganise the facts.

Solder
I’m heading home
He breaks into a run.
—
Sam Machell is a multidisciplinary artist based in Plymouth, UK. He’s interested in post internet confusion, the eerie projected self, and collapse.