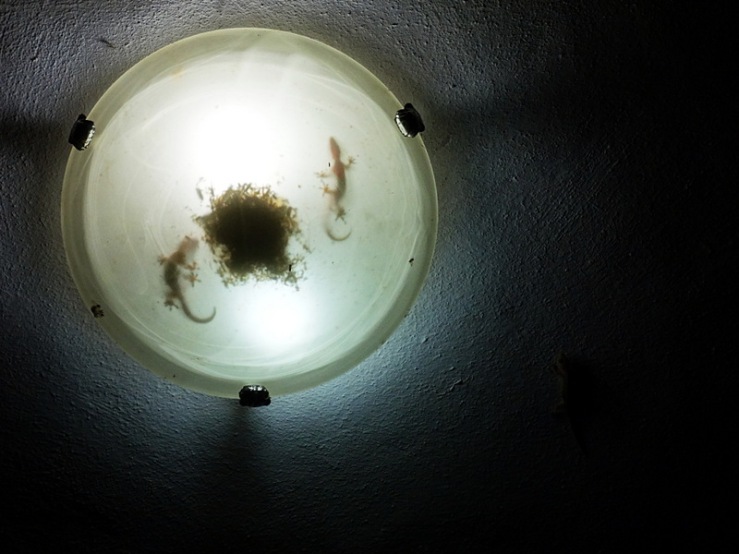 The reason for my insomnia tonight:

I have always felt strongly about playing a game of my own invention. Blind stubbornness. It is the artist game. This thirsting for work bit is doing me no good. It scrambles my brain and sucks my energy.

The brain is firing off with worry that I will be competing for dishwashing jobs for decades to come. Even at this phase of adulthood the ends still cease to meet. Sometimes I feel like I am my own imaginary friend. I am unsure if the previous moment, day or year even happened because I keep returning to this job hustle that remains ambivalent to the creative life that I have worked to harness.

The impulses by which I have been guided have always felt like the responsible moves even when common thought might say otherwise. Is stubbornness simultaneously my best and worst trait? Am I delusional to say that everything that I am does not define me?

There is a Twilight Zone episode titled Nightmare at 20,000 feet. A man is on an airplane and he sees a strange creature standing on the wing. He tries to alert the other passengers of the creature but no one else can see it. The man is eventually restrained and the plane makes an emergency landing so the man can be removed. As he is taken away in a straightjacket everyone can see that the wing is shredded with claw marks.

On most days, I feel that people see me as being the man pointing out of the window while I see myself as being the creature on the wing.

Not too long ago my mom was driving me to the airport. My flight was very early and it was still dark. We were riding in silence when my mother said to me:

“I saw a David Bowie interview a few years ago and he said that he often shape-shifted because we are living 7 simultaneous lives at all times. He said we have to be patient and let each of our different selves take turns. Eventually, over a lifetime, each will surface.”

Years ago after dropping out of college I backpacked across Europe. I slept outside and went days without speaking to anyone. Some days I would read my horoscope and I would see things like“ there may be drama at the office today” or “beware of gossip amongst friends.” I had quit my job and there was an ocean between myself and everyone I knew.

I was no longer the person that my horoscope thought I was.

I keep waking up at 4 a.m. This morning I couldn’t get back to sleep so I began to read articles about how 4 a.m. is referred to (by some) as the enlightenment hour. It is said that if you wake up at 4 a.m. then you should lie in bed and clear your mind so you don’t miss whatever messages are being sent to you.

Ingmar Bergman made a movie where 4 a.m. is referred to as “The Hour of the Wolf” (also the title of the film.) In the film, ghosts and spirits emerge and move freely because it is the hour where most of the living world is sleeping and the dead can move about unseen.

Those whom I have shared a bed with have often observed that I am the last to go to sleep and the first to wake up. Maybe I have failed repeatedly to receive the information I have been sent and my insomnia will continue until I finally learn to listen to what these invisible forces want to tell me.

If one is meant to be more attuned but remain half asleep then how am I to know if the information I was sent hasn’t been subliminally delivered? How do I know if the ghost have delivered their mail?

The reason for my insomnia tonight: I had a drink last night with my friend who works in a psych ward.

She told me how she has been overseeing the case of a hasidic teen who had recently suffered a psychotic break. The case had been frustrating for her because his family and the hasidic community have been refusing to provide any context about the boy’s behaviors. They just want him fixed.

The boy talked freely but the staff were unsure if they should trust him. Everything he said seems grandiose and distorted. He so clearly enjoyed the attention of being questioned that it seemed he might say anything.

After a few days in the psych ward he began to ask my friend questions about prison. What is it like inside? Does everyone get raped? What would he have to say for the doctors to call the police? What if he confessed to a murder? What if he had molested a kid? What if he said he was a serial rapist?

She answered professionally while taking note of each proposed crime.

The next day she was at home and the hospital called. The boy had confessed to molesting multiple children in his community, including his younger siblings and cousins. The police were called.

His parents are now saying that they had known about his actions for some time. His mother had banned him from being alone with other children but she recently had seen him walk out of his younger sister’s room wearing only a towel.

After that incident she told him to see the Rabbi. The Rabbi told him to simply stop molesting children and everyone had assumed that was the end of that.

My friend suspects that the reason that the family had refused to participate in the case is because pedophilia is running rampant in the hasidic community and that they didn’t think that his actions deserved any special attention.

She suspects he got himself institutionalized because he feared his compulsion and he has wanted it all to stop.

He had tried to confess but no one listened.

The reason for my insomnia tonight: I have always felt strongly about playing a game of my own invention. Blind stubbornness.

I work now in an office. For the first time this winter I have steady income and I am miserable. I have never felt so disengaged with my own life. I wake up at 5:30 a.m. and I take a shower. By 6 a.m. I am drinking coffee and attempting to write. Most of what I have written has been scrapped, because it is not interesting.

For the past 5 months I have worked on this project where I write these small pieces that are reflections of my day to day. I don’t want to write about the office because I am not interested in the office but for 40 hours each week I am at the office.

By 7 a.m. I am biking to work. On my second day I got pulled over by a cop because I rode my bicycle through a red light. No one was walking, driving or even thinking of using the cross street. I stood by the cop car in the cold, february morning light while this NYPD cop ran my expired NC state ID through his car ID machine.

He handed me a piece a paper and I gave him a staredown of brotherly betrayal. I biked on to work, knowing that whatever I made that day in the office would not be going towards the crater sized potholes I was avoiding falling into. The money would pay for some facial recognition instrument that the NYPD is testing for the next wave of protests.

I work until 4 and then I bike home. After my first day at the job I directed traffic so people wouldn’t run over a man who was laying in the road and bleeding from the head.

I try not to be so selfish that I treat other people’s tragedies as premonitions for my own life. The fact of the matter is that during my first two work commutes my path was obstructed by either blood or money. That’s all I am going to say about that.

After I get home. I make dinner. I then try to write but my mind is fried. I am the diet soda version of myself. I don’t recognize myself in my own life though the landscape is mostly the same. But money!

I often created games for getting to sleep. I did not count sheep or clouds. Instead I could be eased by imagining machines shutting down. I imagined whole office buildings as their lights turned off one by one, the white noise of sleeping radio stations and families of balloons all growing limp and slowly lowering themselves to the ground.

Dylan Angell is a North Carolinian who is currently based in Queens, New York. In 2016 he released the book, An Index of Strangers Whom I Will Never Forget A-Z, via his Basic Battles Books imprint. He has collaborated on two books with photographer Erin Taylor Kennedy; 2017’s I’ll Just Keep On Dreaming And Being The Way I Am and 2018’s Beyond the Colosseum. He has been published in Fanzine, Fluland, Parhelion, The Travelin’ Appalachians Revue and Sleaze Magazine. Sometimes when he can’t sleep he will ride his bike and listen to Bill Evans.